Nomades magazine… I recently invited you to follow via your social network their stunning escapes and authentic universe I have been sharing here too for 2 months.

They also cover some surprising encounters. You might have read the article here about Alexandre Sookia, a Rock Folk musician. Today I am sharing their meeting in Plouharnel in Brittany with Lionel Herphelin aka Le Bûcheron (The Woodcutter from the sea – whom you can also follow on facebook).

Beside being an amazing encounter, Nomades under water, portrait  & hands working wood pieces photos caught my eyes as always.

An artisanal know-how for the realization of boards to surf for the bodysurf. Le Bûcheron.

Not far from the sea, Lionel Herphelin takes us to visit his workshop. It is in his home garage that his surfboards come alive. In the middle of the room, the table on trestles becomes the Bûcheron’s workbench. It is covered with sawdust and wood chips, a mixture that reflects the sanding, planing and drilling work.

On the wall there is a large collection of hand planers, rasps, jigsaws, drills, drill bits, sandpaper, but also wood chisels, templates, hammers and other shape instruments. A little further on, is fixed an old rusty saw with, written on the worn blade, the words painted by hand: Le Bûcheron, surfboards and other pieces of wood. 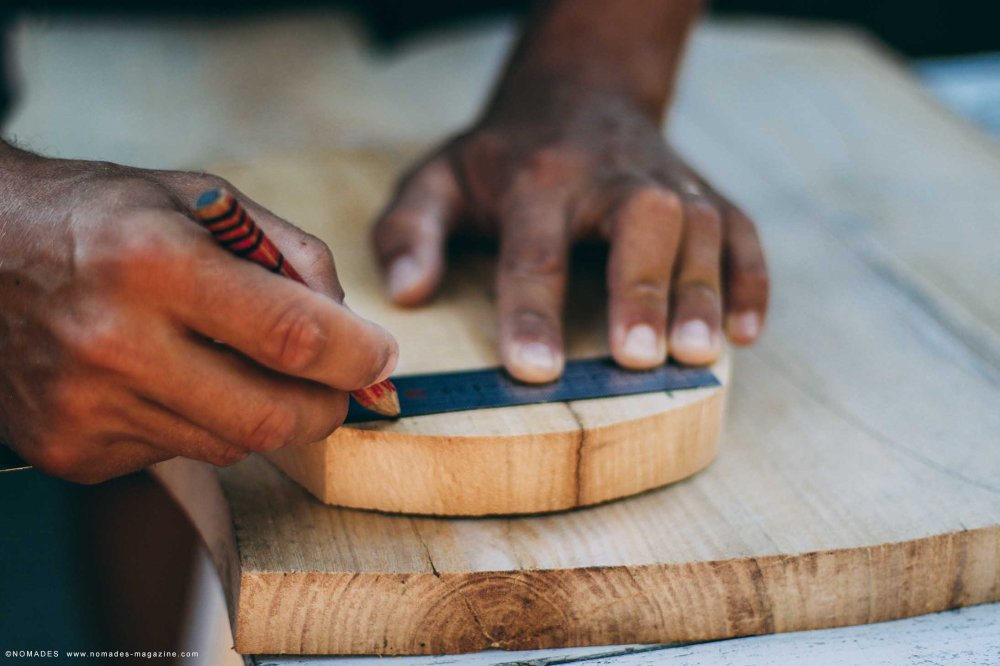 The workshop would not be complete without the presence of surfboards.

A retro longboard, and a bi-colored egg shape are hanged from the ceiling, the signature is Marc Billion’s, shaper at Plouharnel, also known under the name of Atao.

Lionel prepares five wooden planks of elm. He takes care of a first piece of wood, scarcely thirty centimeters long. He passes blows of planes, caresses the edges, looks at the lines, and repeats these gestures several dozen times, like a metronome.

When the machine goes out, tiny particles of wood still float in the air, the smell of freshly cut wood is pleasant. Lionel removes his mask, a new surfboard has taken shape. Each model is validated and produced only after being tested. 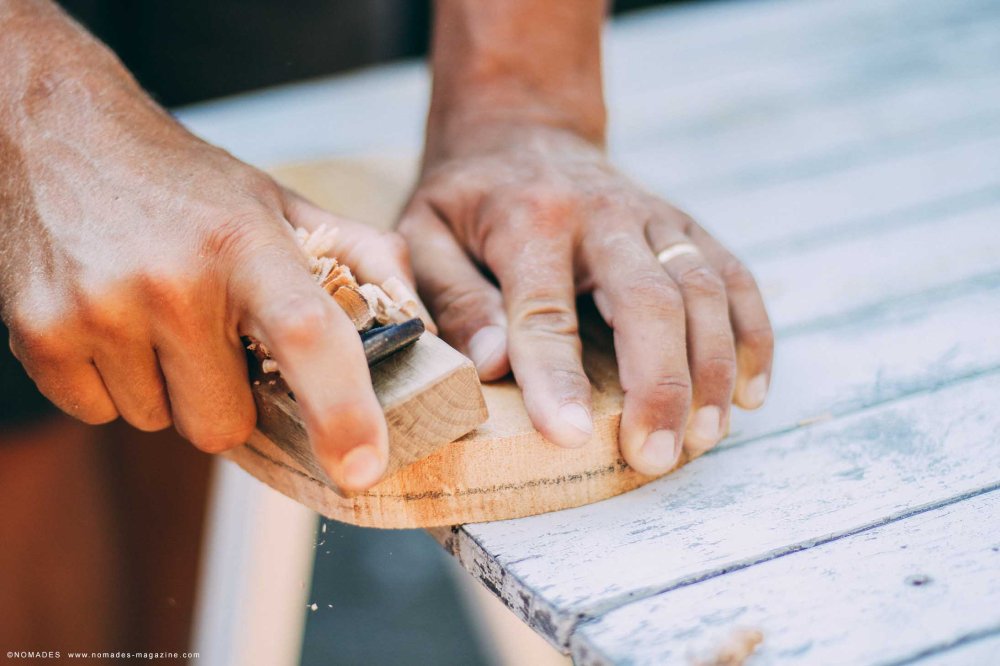 This fellow of one meter eighty-five, built like a Breton wardrobe, was not born here.

Lionel comes from the North, far from the sea and a stone’s throw from the Belgian border. Forged in swimming, rugby and walks in the forest, nothing destined this Northern blond with azure eyes to settle on the water side – whatever.

Lulled by the stories of his father, who often went to the other side of the world for work, he discovered the Australian culture for which he was passionate. Surfing, skateboarding, boomerang, didgeridoo, will be his new passions.

Later, during a family trip to Bidart, the transition from theory to practice was more tedious than hoped. It is by courage, ream and energy that he will learn surfing, drawing inspiration from others.

The willd spaces and nature taught him to become enthusiastic for trees, even drove him in studies of forestry technician in the Loiret, in the School des Barres.

A first six-month internship in Guadeloupe at the National Forestry Office (NFB) will enable him to discover a marvelous island, where the gliding under a heavy sun and in a crystal clear water can be practiced every day. It is in contact with the premises that Lionel will perfect himself in surfing and will learn the bodysurf.

After completing his studies, Lionel settled in Haute Vienne because of the 1999’s storms and then returned for one year and a half in Guadeloupe accompanied by his wife. Return to the continent with a stop in the forests of the south of the Landes. They settled some time in Corrèze to finally drop their luggage in Brittany in Bay of Quiberon, where they live today with their two daughters. 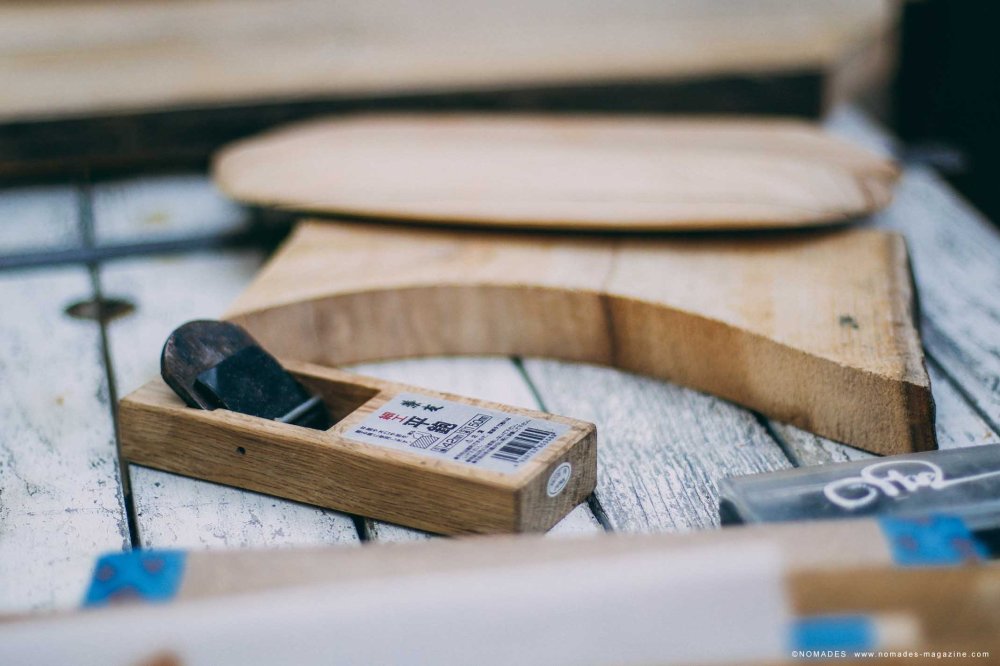 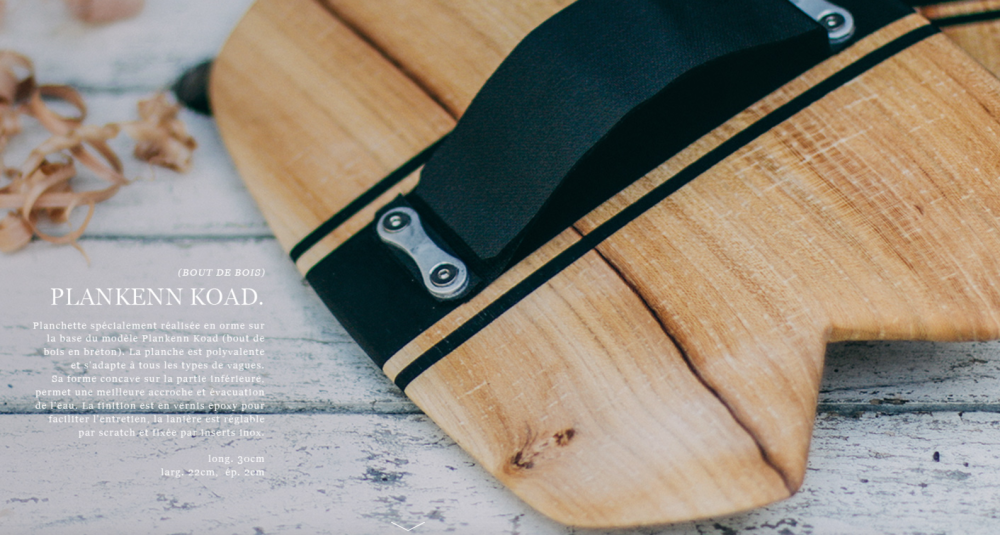 Today, Lionel is an arborist technician in a pruning company in the Morbihan.

The passion for wood has always followed him, and it is on the basis of pieces of choped down trees that his first achievements have appeared. His boards are called handplanes, they facilitate the departure to the surf when the bodysurf is practiced.

After many researches, the first prototype is made of cypress from trunks cut from a Morbihan sawmill. Then followed a long series with different shapes, design and wood. Many researches and passion to achieve a satisfactory result.

Today, Lionel has created the brand « Le Bûcheron de la Mer » and focuses on the manufacture and marketing of different models. Each model is specific to adapt to all types of use, from the discovery of bodysurf to the most confirmed. Some of his boards are sent to Australia and even Hawaii. With the production of his small boards, he participates in making bodysurf better known which remains today a confidential practice in France. 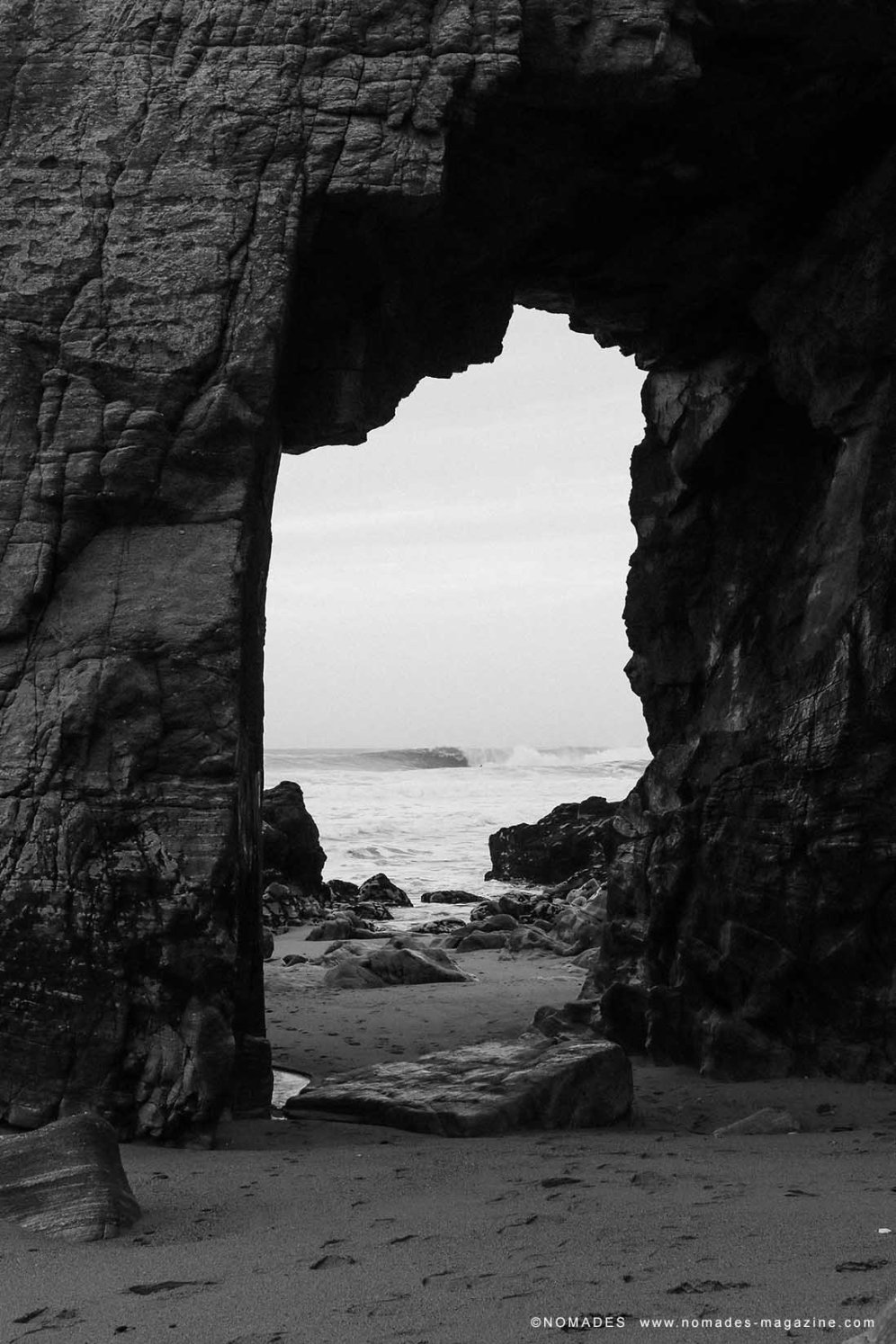 … are the historical and well-known spots to all in Presqu’île de Quiberon. Stopped on the parking lot we go out to scrutinize the horizon. At each session, the same ritual: climb on the dune to see the sea and evaluate the waves before going to the water. At the top of the dune, a huge wild beach stretches as far as the eye can see. The spot of Port Blanc is perfectly adapted to the practice of the bodysurf: fast and hollow waves, often tubular. This is the time to test the new model.

We find Lionel, palms at the foot and a new prototype in hand. He starts in the water where a beautiful regular wave forms. After several minutes, he leaves on a wave bigger than the others and offers a long and beautiful slide. His arm is forward and rests on his board, his body is straight like a human surfboard. After a dozen surfs, we return to the beach, Lionel is pleased with the behavior of his prototype. There will be some retouching, but the model is validated. 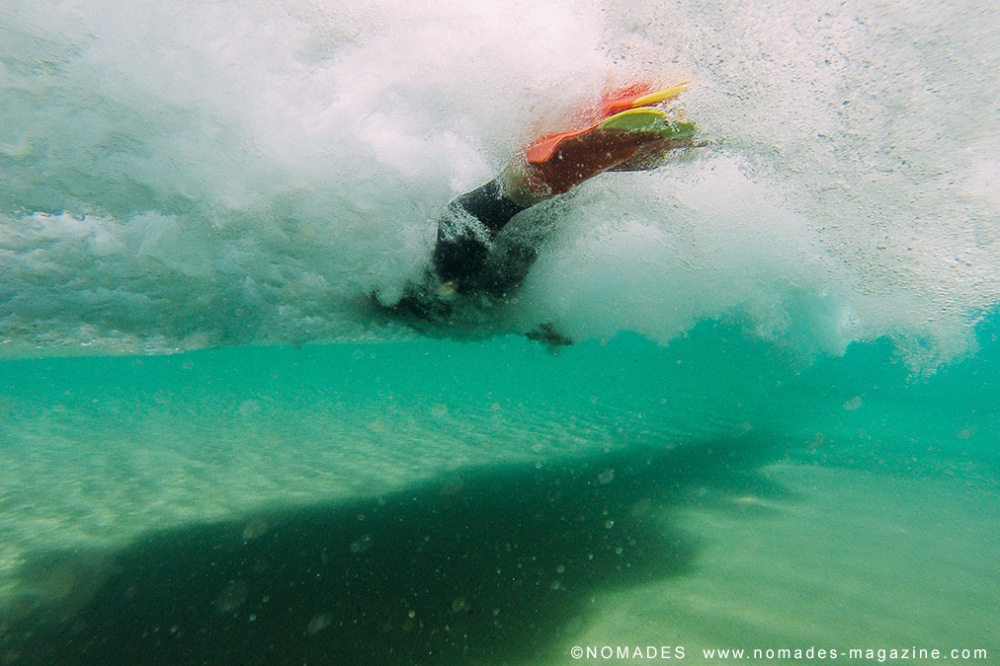 Should you wish to buy a pair of handplanes, go & visit Nomades online collaboration shop

You can also read again: OUESSANT •  NEW-YORK • JERSEY  by Nomades